For the third time in four years, the IEEE Computer Society International Design Competition (CSIDC) has selected an NC State Computer Science Senior Design Center project as one of the top ten in the world. Approximately 300 universities submitted entries to this year’s competition.
The student team responsible for this project will be traveling to Washington, DC at the end of June to participate in the CSIDC 2006 World Finals.
The 2003 team placed third in the world with their Diet Download project, while the 2005 team placed first in the world with NEAT: Networks for Endangered Animal Tracking project. NC State’s 2005 team was the first from an American university to win this prestigious international competition. 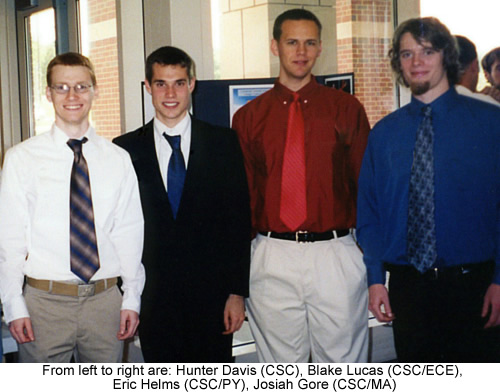 Students representing NC State in the CSIDC 2006 World Finals are: Hunter Davis (Computer Science), Blake Lucas (Computer Science & Electrical and Computer Engineering), Eric Helms (Computer Science & Physics), and Josiah Gore (Computer Science & Mathematics). The team’s mentors are Dr. Robert Fornaro and Ms. Margaret Heil of the NC State Computer Science Senior Design Center and Mr. John Streicher of the National Oceanic and Atmospheric Administration.
The theme of this year’s competition is “Preserving, Protecting and Enhancing the Environment”. In keeping with this theme, the NC State CSIDC 2006 team created a product called SunRay.
SunRay uses ray-tracing combined with a numerical model of solar radiation to calculate UV exposure for an arbitrary 3D model, in particular a graphic representation of a human form. The SunRay system collects atmospheric data from a pyranometer to provide real-time input to model calculations. SunRay is a research tool that provides detailed simulated solar exposure data that is accurate and easy for a scientist to use. The goal of the tool is to assist the scientific community so that it can more effectively provide a convincing rationale to encourage the need for societal and environmental changes.
For more information about the competition, please see: http://www.computer.org/csidc/TopTen.htm
Congratulations to this fantastic team, and best wishes as they prepare to go to Washington!
Please stay tuned for more details.